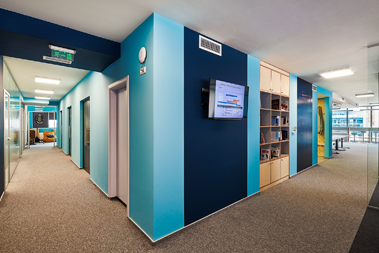 Back to the Office

Although not in a DeLorean, I was steadily driving to our office for the first time in a couple of months. I parked my car, got to the 10th floor, and stepped out of the elevator. A routine chain of events...

"The thermometer's battery is dead!" was the first thing I heard. A knife, two extension cords, and a power bank later the issue was resolved. And we sincerely thought we were ready to "reopen shop"😅.

We did our best to prepare, though. It is part of our values as a company to gather as many opinions as possible before we take important decisions. The topic of getting back to the office was no exception. We sent out a short survey to all employees in order to get a better understanding of their attitudes and, as usual, we received plenty of interesting insights.

Overall, it turned out that we faced a somewhat normal distribution regarding the comfort level of a possible return. The majority of people, however, stressed that they would either wait for the situation to further cool down, or their actions depended on factors they could not control at that moment (e.g. reopening of kindergartens and schools).

In terms of measures expected to be introduced, the common themes revolved around:

Furthermore, it turned out that some people had fallen in love with remote working, while some could not wait to get back to their desk. What was quite unexpected, however, was that more people reported increased productivity than the ones that felt the opposite.

After taking all the input into consideration, we decided that it was time to take action in order to address all expectations. After introducing the measures we really believed in, we gave everyone the choice to decide for themselves when and for how long to come to the office. The results in terms of attendance after several days paint an interesting picture.

Even with such a small sample size, I already believe that the "new normal", at least for us, will be more of the same. We will hope that we have done everything possible yet we will deal with the sudden hic-ups of the unknown, just like the thermometer issue. We will have the "base" days when only people that feel more productive in the office will show up yet we will have our "max" days when we really want to see each other.

The latter poses a question about the imminent evolution of our company culture, thus far centered around being in touch and being "there". Yet, this is a story for another time... just let me get to my DeLorean and I'll come back with some insights from the future 😉.

These Stories on what we do