I recently realized that we have spent five years at Documaster researching and making technology work for so many customers, and yet, very few people outside the company know much about our technology stack. In this post, I will describe our stack and point out why we believe we made the right choices when it comes to technology – choices that not only make Documaster a superb product on its own but also a product that integrates nicely with various third-party applications.

Deciding on a technology stack is never easy, especially when developing complex software. It is worth noting that having a team with a broad range of programming and infrastructure experience certainly expands the possible technology choices. At Documaster, we always follow a few guiding principles when selecting technology: 1) we must be free to use any technology if it is a good fit for the problem we are trying to solve, 2) we must have full control over supporting the non-functional requirements of our software (performance, scalability, reliability, etc.), 3) we will stick to widely adopted technology with rich and mature ecosystems, but 4) we will also adopt cutting-edge but production-ready technology when our customers and products will benefit from it. 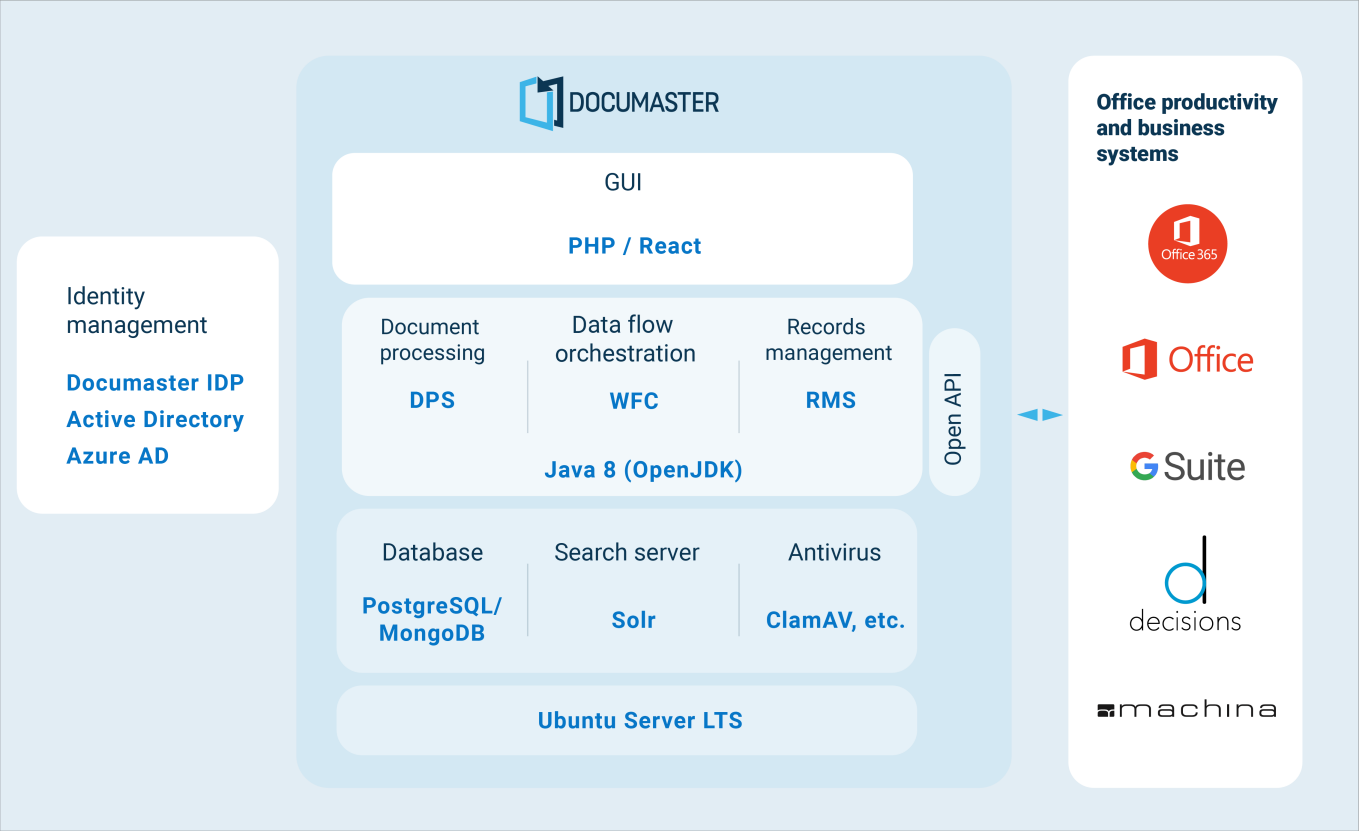 Our databases of choice are MongoDB for storing non-relational data and PostgreSQL for storing relational data. MongoDB is probably the most used NoSQL database and undoubtedly one of the most mature. Being a relational database, PostgreSQL has a much longer history during which it has had to compete against many serious rivals. Despite this, it has managed to become the fourth most popular relational database in the world. PostgreSQL will likely not be in the top three most widely used relational databases (1st – Oracle, 2nd – MySQL, 3rd – SQL Server) anytime soon, but it surely offers a great mix of performance, reliability and cost compared with its main competitors. Oracle was never a viable option for us due to its licensing model, which is incompatible with what we do. We considered using MySQL until PostgreSQL outperformed it heavily during the tests we conducted. SQL Server simply did not run on Linux until SQL Server 2017 and thus was not an option for us. However, we will keep a close eye on its future development. Note that we use object-relational mapping frameworks but have decided to stick to specific databases to be able to optimize our software better, while ensuring that Documaster is not too tightly coupled with any particular database.

Each physical host runs Linux with two key components installed – LXD and ZFS. LXD is a container management framework that aims to host a complete Linux operating system (as opposed to Docker, which focuses on application containment). While container technology has an almost forty-year history, it only gained significant traction in the past few years, reaching a point where containers are now a great lightweight alternative to virtual machines in many cases. LXD containers are a lot less resource-intensive than a virtual machine because they share the host’s Linux kernel and do not need a hypervisor to do hardware emulation. LXD allows resources such as CPU, RAM, disk space and disk IO bandwidth to be dynamically allocated. The greatest thing about LXD, however, is the fact that it supports ZFS natively.